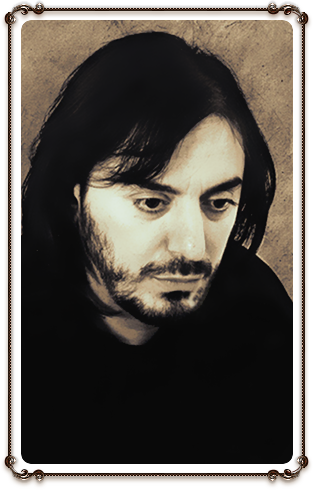 Mario Routi is a cool, mysterious and slightly sloppy guy. He sneaked to the third planet from the sun more or less forty+ years ago, taking advantage of a tender moment between his lovely parents, using them as his Portal.

As a child, he wrestled and boxed every day with his dear brother, but without really hurting each other. During his youth years, he worked hard to persuade friends and teachers that he was just a normal guy who was indeed from this world, and not some dangerous alien.

Submitting to the demands of contemporary society, he was forced to study several stuff, here and there, in order to penetrate the business world, escaping a few years later to become an author.

Having written a few dozen articles, a script or two and a couple of best selling novels, he created his own world, one which lives inside his skull, where he continually tries to persuade his characters that he is not a god but just their creator, so they should see him more like a father, just as his beloved Earth children do. He is proud of his characters, viewing them as individual, autonomous creatures, not bound or guided.

He currently flows between the Earth and the Land of the White Sun, wandering in the deepest places of both worlds, bringing his readers back tales of the adventures of his heroes.

Meanwhile in reality, his biggest problem is forgetting where he has parked his car, (or his spaceship), while his greatest worry is reserved for how his favorite soccer team will fare.